What do Zimbabwe and Weimar Germany have to do with the U.S. Dollar?

This may seem like a far-fetched example. What could Zimbabwe’s stock market and failed currency possibly have in common with our economy and the dollar? Actually, a lot! Notice how the rise in Zimbabwe’s “Dow” mirrors the growth in their money supply. Put another way, it was the creation of all that money that increased the value of the stock market.

This is the stuff that super equity bull markets are made of. Liquidity is the grease of the wheels of equities until confidence in the currency of that market is impaired severely.

There is no limit to the size of Federal Reserve Balance sheet outside of the level of the US dollar. 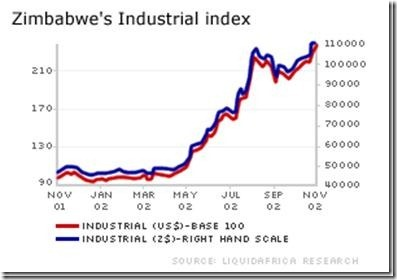 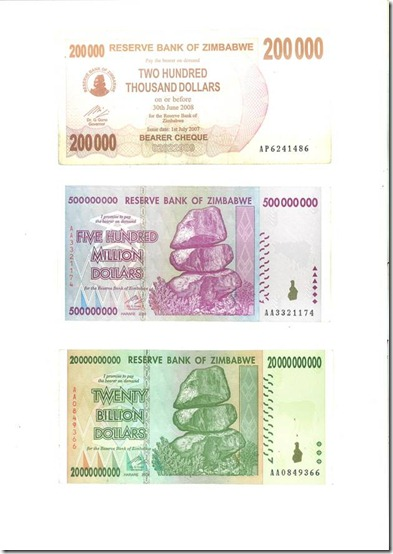 The more money they created, the less it was worth – it took more currency to buy “things,” anything, from food and clothing and energy to stocks. Any savings in the local currency was wiped out. Notice the timeline at the bottom of the graph. This all took place in just one year. And that is how hyperinflation works.

In 1922 in Weimar Germany, the same thing happened and it took less than two years. 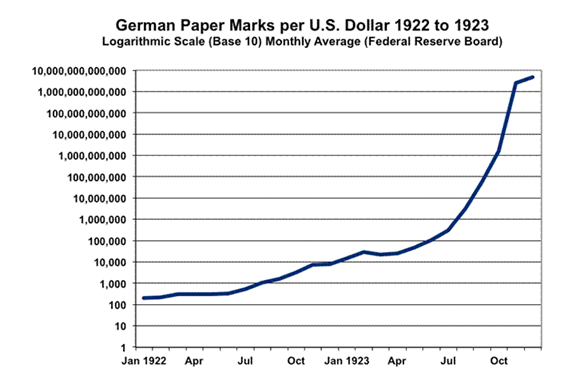 What do Zimbabwe and Weimar Germany have to do with the U.S. Dollar? They are examples of what happens when a government or central bank print money to purchase their own debt (bonds). Isn’t that exactly what Quantitative Easing is all about? Of course it is.

The Fed is injecting more than one trillion dollars a year into the economy, either directly into the banking system or through the purchase of $45,000,000,000 a month into US Treasuries. That is what they call “Quantitative Easing.” The longer they stick with this policy the greater the chance that the dollar will go the way of the Zimbabwe Dollar or the German Mark.

Jim Sinclair has coined the phrase “QE to Infinity.” He insists that the Fed has no alternative and must continue with QE. If they stop, interest rates will rise, the stock market will fall, the bond market will crash, and the economy will implode. This is not politically acceptable. Interest rates must be kept in check!

The Fed’s goal of buying the bonds is to keep interest rates at an artificially low level, near-zero, and they are successful in that regard. But with interest rates so low, the banks and hedge funds are avoiding the Treasuries because the return is so low. They are using the Fed’s “liquidity” to purchase stocks and the result is the rise in the Dow and the S & P. The record-setting stock market is not due to a strong economy. It is primarily due to low interest rates and a bond market bubble that is there for all to see. Even bond maven Bill Gross has been warning of the danger in investing in bonds now.

In the following chart, inflation (as calculated by Shadowstats Alternate method, which is more accurate than the BLS version) is projected to accelerate at a frightening pace. Note that the inflation really took of after 1971 when Nixon de-linked the dollar from gold. The two lines start to deviate in 1980 when the government started to alter the data.

Jim Sinclair puts it this way:

I am of the firm belief that Economic Law exists, therefore it is axiomatic the consequences for long term and huge violations will occur. As such, what has already occurred due to the OTC derivative meltdown in the Western financial system must come home as significant depreciations of the major currencies representing the major practitioners of debt monetization and a wholesale drop in the purchasing power of fiat currency.

He could have simply said we are moving toward hyperinflation.

Porter Stansberry just released a report that is about as pro-gold as it gets. Stansberry isn’t exactly what I would call a Goldbug. Yet to listen to his presentation, you would think he was THE Goldbug. He has a very large international following. So to hear Porter talk about gold at $10,000 or higher and silver going to many hundreds of dollars an ounce is rather a surprise. Not so much the reasons he gives, but the fact that it is HE who is the one offering the opinion.

Stansberry guarantees that it will happen without warning, at any time. The reason is because there is only a fraction of the physical metal available to meet the enormous paper promises. There is not even a fraction of what is necessary to meet the promises and obligations of those issuing the contracts and portending to have the metal on hand in their non-allocated storage facilities. He warns if you have any gold stored in a bank; get it out now, if you can. If you own gold in an ETF, you will never see an ounce of it. You must have physical gold and silver and in your possession to be safe and to take advantage of the explosion in price that is certain to follow.

The exit has already begun. Germany has asked the U.S. to return 700 tonnes of their gold. It will take years before it is all returned. And that’s just 700 tonnes! If it were all there, unencumbered, why the delay? Venezuela took delivery of their gold from the Bank of England. Other central banks are lining up to bring their gold back too.

The current record-breaking global demand for gold is another indication that people want the physical metal now, and not the paper substitutes.

All it will take is just one “failure to deliver” and the rush to the exists from all forms of paper gold and silver – from ETFs to so-called bank storage programs – will bring down the paper system in a matter of days and the price for the physical metals will have no limit to how high they can go. Who will want to sell their gold and silver in this environment? The minuscule amount of coins that are offered for sale by the mints will be gobbled up immediately and there will be virtually no product available to purchase, at any price. Whatever metal shows up on the secondary market will be priced to reflect the supply-demand shortages. That might be a good time to sell a few ounces and pay down your mortgage.

In the last few years, the entire dynamic of the gold market has changed dramatically. Central banks, which formerly were sellers of up to 400 tonnes a year, are now buyers. Gold mines in America and South Africa are mining far less gold than they were a few years ago. Demand is increasing and supply is decreasing and yet the claims against available physical gold are multiples of what is actually available. They can get away with this because so far, very few people stand for delivery of the actual metal. They take paper profits. When investors start to demand the physical metal and not the paper profits, the game is over. This is not only an explosive situation; it is a guaranty of a massive price increase, one that is just a failed-delivery away from occurring.

Porter makes it very clear that gold and silver are on the cusp of an explosion in price and it absolutely will happen. It will happen so fast that you will not be able to jump aboard after the fact. Either you own it now, before the fireworks begin, or it will be too late. And it’s not just about making a killing in gold and silver – when it happens, the dollar-based investments that most Americans have will suffer greatly. Gold will have shown the fiat currency system to be a fraud. The fractional reserve system in currencies and in gold and silver will be exposed. We couldn’t agree more!