Why did Gold and Silver Drop on Friday?

I look forward to checking out what others have to say about the gold and silver market.  I never miss a day.  Currently, there is a lot of talk about the shortage of physical gold, whether COMEX or GLD have all the gold they claim to have, backwardation, and articles are showing up focusing on strikes in South Africa and others point out how the mines can’t make a profit at the current price levels.  All of these topics play some part in the price of gold, but the elephant in the room is still, as Ted Butler so aptly puts it, JPMorgan’s market corners and their collusive commercial price rigging on the COMEX.

A friend of mine called and wondered what happened on Friday to cause the large drop in the gold and silver price?  That is an important question.  And the answer is a very simple one.  Nothing!  Don’t you find it odd that the price can vary by three percent to five percent in a day for no reason at all?  Well, there is a reason.  JPMorgan is the reason.  Just ask the regulators over at the CFTC.  Butler has been asking them for the last five years but they still haven’t found the time or will to answer.  If the blatant manipulation that is an everyday occurrence in our markets occurred in any other commodity – oil, cotton, cattle, etc. it would not be tolerated.

According to his research, and data from the Commitments of Trader and Bank Participation Reports, Ted Butler estimates that JPMorgan has a corner on the gold and silver markets and manipulates both while profiting some $3.5 billion along the way.  They are long nearly 20% of the COMEX contracts in gold and they are short around 15% of the silver market.  If anyone else held this large of a position, long or short, in any other commodity, the CFTC would charge them will illegally cornering the market.  They are getting away with the same kind of “corner” that the Hunt Brothers employed in 1980 but that was not tolerated.

I realize that many of our readers get discouraged because of the manipulation.  I get frustrated, but never discouraged.  This is a process that cannot go on indefinitely.  Gold (and to a lesser degree, silver) are the antithesis of the US dollar (and all fiat currencies).  The monetary policies in the US, China, Japan, Europe, and all the major countries are terminally inflationary.  Competitive devaluations are the norm.  It doesn’t always appear that we are inflating the dollar because our trading partners are inflating theirs at the same time, so the value of the dollar seems to be stable.  It has been bouncing around in the low 80s on the USDX for a while now and there is a sense of calm that is not justified.

Here is the Federal Reserve’s balance sheet for 2013.  Does this look stable and sustainable to you? 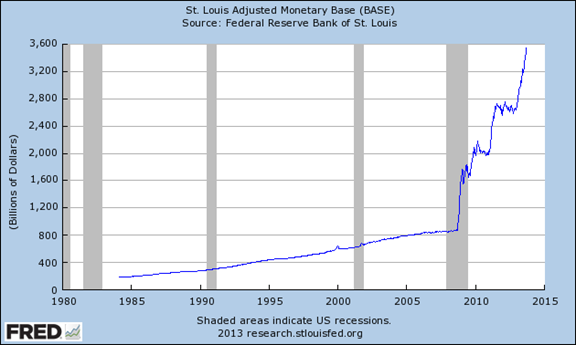 And what course of action is the Fed going to follow?  They decided that they could not cut back on their purchase of bonds at their meeting last week. They understood that to do so, even in a token manner, would be catastrophic to the economy, the stock market, the real estate market and especially the bond market.  That said, the 45 degree uptrend shown above, will continue at the same incline.  How can the dollar actually hold its value when the Fed is adding a trillion dollars a year to the money supply?  Even “velocity” is low and the banks aren’t actively lending, the flood of dollars is rising by the minute and at some point it will overflow into the economy and prices will start to rise rapidly.

It’s not a matter of if, but of when.  That’s why people accumulate physical gold and silver.  We see what is coming.  The chart above shows it.  The Fed’s reluctance to slow down the process shows it.  And the fact that after the large moves up on Wednesday, after the Fed’s announcement, were met with a large sell-off on Friday only proves that JPMorgan and friends are still up to their old tricks.

JPMorgan joined the “game” in 2008 when they took over Lehman’s silver and gold shorts (at the government’s urging).  The manipulation has been going on in full view ever since.  When JPMorgan took over, silver was down to $9.00/oz. and gold was as low as $720/oz.

One could conclude that the manipulation has not been terribly successful!

As long as central banks continue to expand their balance sheets (and they do) and as long as China and India and Russia are BIG buyers of physical gold and silver (and they are), which they use as a “hedge” against their enormous US dollar holdings, the manipulation can only buy time, but cannot win.  We are very close to a disconnect between paper prices on COMEX and the real price it takes to source physical bars and coins.  The rebound from the last year and a half of downward pressure should start in October and pick up steam into the early part of 2014.

As Jim Sinclair says, QE to Infinity is guaranteed and so is gold well above $3500.  I believe him, except I believe his number is quite conservative.

Final thoughts:  With the current silver to gold ratio back up to around 60 to 1, silver is a better buy!  A much better buy!  That is where I would put my funds today, if I were a buyer.  JPMorgan have been reducing their shorts on COMEX since the spring and the number is now backing down to the area that they inherited from Lehman Bros.  They seem to want to get out of their position.  Once they take their foot off the break, silver will run!!!

Switching from gold to silver on a cash basis (no margin) is the only way the trade should be contemplated.

The gold/silver price ratio shouldn’t expand widely from current levels of near 60 to 1, but with a rabid dog holding market corners the wrong way, that is what we may witness in the short term. But it’s the long term that matters the most and JPMorgan’s unintended market corners in gold and silver will eventually result in silver outperforming gold in a major way.

Check out the Egon von Greyerz and Paul Craig Roberts interviews on King World News. They are very important!

It did not surprise me at all that the Fed did not taper because for a patient on life support that is not the time to turn off the machine because that machine is what keeps the patient alive artificially.  So how can the Fed possibly slow tapering?

The US is a country with a total government debt of $220 trillion, unemployment at 23%, the job participation rate at the lowest level since the 1970s, median household incomes at multi-decade lows, and real-GDP declining since 2006.  We have also seen federal debt double since 2006, and consumer credit has been exploding.  So the picture is clear…

“Not only will there be no tapering, but my forecast is that during 2014 QE will increase substantially.  In fact, we could easily see QE double in 2014, and later on I expect trillions of dollars, and eventually even tens of trillions of dollars of money printing each year.  This will also mean increased turmoil and chaos in global markets.

So the US is now on the road to hyperinflation.  Hyperinflation arises as a result of a collapsing currency and this is exactly what is happening to the US dollar.  Back in the late 1960s, when I started working in Switzerland, we paid 4.3 Swiss francs for each US dollar.  Now it only costs us .91 for each dollar.  That’s a decline of 80%!

Why will the dollar go down?  For the simple reason that the US has created a mountain of debt of enormous proportions.  This is a debt mountain, which can never be repaid with real money.  This is why the US will have to print unlimited amounts of dollars over the next few years.  But this will only add to the problems the US faces.

The collapsing currency will drive prices of goods and services exponentially higher.  But the falling dollar will also start a vicious downward spiral with other countries selling their dollar assets, including their Treasury bonds and that will lead to even more money printing.  This will cause the dollar to fall even faster and interest rates will surge more quickly during this period as well.

Pension funds and savers will also be forced to invest in rapidly plunging Treasury bonds in order to prop up a collapsing bond market.  But all of these Draconian measures will be in vain, Eric.  I know this paints a terrible picture, but this is all likely to start during 2014, and, sadly, it will lead to a hyperinflationary depression.

The political scene will also change and many countries could have anything from totalitarian regimes to anarchy.  So physical gold and silver will be the best way to preserve purchasing power during the coming collapse, but it must be held outside of the banking system.”  You can here the interview by CLICKING HERE.

Former US Treasury Official – Terrifying US Collapse Ahead

“Here’s the situation for the Fed:  All of the markets, and the solvency of the big banks, are totally dependent on the Fed buying the bonds.

“So they can’t stop QE because the whole system is rigged-dependent on that (QE).  The other part of the trap they are in is that the longer they carry on QE, the closer they get to the time when the rest of the world simply loses all confidence in the dollar because of the enormous rate at which new dollars are being created, and they bail out (of dollars).

So what the Fed is doing is simply keeping the system going as long as it can.  I don’t see how they can avoid a crash.  If they stop QE it’s going to crash.  If they don’t stop it, it’s going to crash later.  So the Fed is manipulating everything to keep the system intact.  And to repeat myself, they can do that, until there is a run on the dollar, and when there is a run on the dollar they lose control.  At that point, (the price of) gold and silver will explode.”  You can hear the entire interview by CLICKING HERE.